Sam Smith has been gaining popularity since he released his debut album, In The Lonely Hour, and apparently not just among music fans. According to the Daily Mail, the 23-year-old singer found himself surrounded by male fans as he was on his way out of Sydney’s Qantas Credit Union Arena, heading to a famous Sydney gay bar called “Stonewall.” 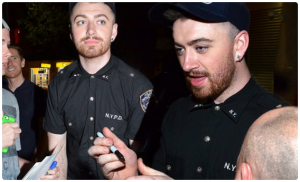 The reason why male fans took so much interest in Sam Smith — apart from being extremely handsome and a music superstar — is because he was dressed in a tight-fitting NYPD uniform.

The “Money On My Mind” singer, who is currently on a world tour, was apparently inspired by George Michael’s “Outside” music video, which features footage of gay couples. Sam Smith confirmed his outfit on Instagram.

After completing a local show of his current world tour, Sam Smith had a “cheat day” and broke his diet by heading to KFC, according to the Daily Mail. It has been reported that Sam Smith lost as many as 22kg after becoming popular in the music industry.

Sam Smith recently visited Adelaide on his current world tour, performing to a packed crowd at the Adelaide Entertainment Center Theatre, according to the Advertiser. 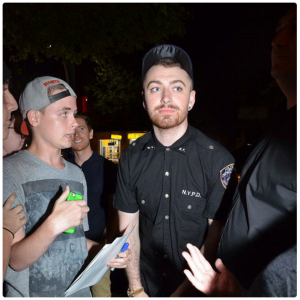 Backed by a seven-piece band, Sam Smith was dressed in a black blazer and a white top, and performed his hits to the audience. His performance was full of passion, and he was good at delivering it. With his heart-breaking “Leave Your Lover,” Sam Smith made both young and old cry at the beginning of his show, according to the Advertiser. Accompanied by modest stage setup and an average light show, the singer was all smiles and chirpy, owning the large stage and confidently performing his top hits.