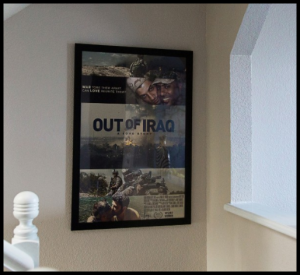 SeattleEach night, when the guns fell silent in Iraq, Btoo Allami would invite his friend Nayyef Hrebid over for dinner.

The two first locked eyes on a dusty battlefield in Ramadi. After days of exchanging hasty glances amid gunfire, they snuck away one night to listen to Michael Jackson on shared earbuds.
The music stopped, but a love story was just beginning.
A decade ago, Allami was a sergeant in the Iraqi military when he met Hrebid, then a translator for the US Marines.
Militants had seized a hospital in Ramadi, and they were part of a mission to reclaim it.
When not defusing bombs, they’d talk late into the night at a pitch black lot surrounded by Humvees. Allami fell in love, unafraid of the war, yet terrified by what was happening with Hrebid.
Their love story would take them through two continents as they joined the 22 million refugees in the world, all fleeing war, grinding poverty and in their case, persecution from militants and relatives. Last year, only 14,700 Iraqi refugees were resettled worldwide, says Andrej Mahecic, a spokesman for the UN refugee agency. The UN does not have the number of applicants who claim asylum based on their sexual orientation or gender identity. Few countries, if any, collect such statistics, he says.

Neither Hrebid nor Allami knew the other was gay. Iraq is not a country where same-sex attraction is discussed in the open.
LGBT people in Iraq risk harassment, beatings, and brutal killings — sometimes by family members. ISIS, which held large swaths of Iraqi territory until recently, has also targeted gay men, tossing many to their deaths from tall buildings.
Despite the risks, Allami took a chance two weeks after they met. “I love you,” he told Hrebid.
Hrebid did not say a word, but drew him close and kissed him.
Allami was so excited, he didn’t eat for two days. At the time, he didn’t know that Hrebid loved his calm demeanor and the way his dark hair shone in the sunlight.
Their relationship grew, but in secret. They knew loving each other openly could be deadly. Even during the days of Don’t Ask, Don’t Tell, when the US did not officially allow gay people to serve in the military, Hrebid says a base officer allowed them to spend time together at the American base.

Their talks put them in a bubble. During those moments, war and bloodshed did not exist.

Hrebid loved his job as a translator.
At the base, his American buddies called him David to protect his identity. But word got out that he was gay, and that he was a US translator. His name was added to a militant hit list posted on the streets of Ramadi.
People started talking. It was time to leave.
In March 2009, Hrebid applied for asylum as part of a program that gives preference to Iraqis and Afghans who translated for the US government overseas. Hrebid’s application was approved eight months later.
The night he got his US visa, they sat up all night in a candlelit room, hugging each other and crying.
As much as it crushed him, Hrebid flew to Seattle in December 2009, leaving Allami behind.
But they kept their promise to stay in touch. One night, as they chatted on Skype, Allami’s relatives overheard them and realized he was gay.
Some of his relatives accused him of bringing shame to the family, and wanted him killed, he says. Terrified, Allami deserted the military and stuffed a backpack with pants and a few T-shirts. Hrebid paid for his ticket to flee to Lebanon in November 2010.
Seven thousand miles away, Hrebid started his new life in Seattle, the only place he knew someone in the US.
But while he was finally safe, he’d lie awake worrying. What if Allami was detained for overstaying his 30-day tourist visa and deported back to Iraq? A return home now included the risk of arrest by the military for desertion.
One day, while at a party, Hrebid met activist Michael Failla and told him about his relationship with Allami. His new friend would become their lifeline.

Living in the shadows

Allami’s new life in Beirut did not involve parties and new friendships. He lived in the shadows and worked illegally as a shoe salesman for $250 a month. Hrebid sent him money to help with upkeep as he desperately sought a way to get him to Seattle.
With every day spent away from Hrebid, Allami sank further into depression. He’d sit in bed at night and guzzle bottles of beer.
Hrebid blamed himself as Allami languished in a new country. Despite the time difference, they did their best to maintain a “normal” relationship. They would Skype and virtually eat together — breakfast for one and dinner for the other.
“We would cook together, and discuss things almost like we lived together,” Hrebid recalls.
They also showered each other with sentimental gifts, including locks of each other’s hair.
Hrebid would sit in bed, smell Allami’s hair and cry. Other days, he’d send Allami long letters describing his undying love.
“My heart melts at the sound of your voice,” one letter says. “When I look at you, I see clear skies.”
In December 2010, desperate to join Hrebid, Allami filed for asylum from the United Nations refugee agency, not knowing it would take years.
The United Nations refugee agency interviewed Allami eight times, but his application was bogged down by translation errors, according to Failla, who attended several interviews with him.
One error in particular complicated his case. During one asylum interview, he was asked whether as a soldier, he was familiar with the Abu Ghraib prison torture. He said he watched it on TV — but it was translated that he witnessed it first-hand, implying he was complicit, Failla says.
In the process of seeking asylum, applicants can have a preference for country of resettlement, but countries decide whether to accept an applicant.
Allami’s preference was the US. But the agonizing wait for a decision was so long, he applied for a separate visa to Canada at its embassy in Beirut.
In March 2013, nearly three years after he escaped from Iraq, Canada said yes.
Allami arrived in Vancouver in May of the same year. He was now 150 miles away from Hrebid, and their dream of living together suddenly seemed within reach.
Hrebid would drive to Vancouver every weekend to see him. On Valentine’s Day 2014, they got married at a courthouse in Vancouver, with Failla as a witness.
“We always say Michael was our angel — the world needs more angels like Michael,” Hrebid says.
Washington state recognized same-sex marriages at the time, and Hrebid quickly applied for a visa for his new husband at the US Consulate in Montreal.
When the consular official approved it, Allami sat down on the embassy floor and wept. Hrebid covered his mouth and screamed.

“I was shaking so hard,” Allami says. “I asked the embassy person to repeat again just to be sure.”

The date March 6, 2015, will forever be etched in Allami’s mind. He finally moved to Seattle to be with Hrebid.
A few months later, on August 8 of the same year, they had their dream wedding at Failla’s house, surrounded by friends.
Allami then applied for permanent residency — known as a greencard — as Hrebid’s husband. The couple relishes their life in Seattle, where they live with their Siberian Husky, Cesar, and cat, Lodus. A rainbow flag draped over the balcony of their new town home flutters in the wind.
Inside their home, black and white photos of their wedding day line the walls. In other photos, they are hiking through the mountains or simply gazing into each other’s eyes.
After six years of living on different continents, their new life is idyllic. Hrebid is a kitchen specialist at a home improvement store while Allami is a maintenance worker for a residential building.
Failla describes the couple as “major influencers” in the gay community in Seattle. They open their home to LGBT people who’ve fled the Middle East, help them get jobs and into schools, and teach them about their new culture in the US. They’ve helped 21 people find jobs and places to stay, and are working with several rights groups such as Canada’s Rainbow Refugee to assist more.
“First we were the ones who needed help now it’s our turn to help,” Hrebid says. “Anything we can do, even if it’s changing people’s minds just by sharing our story.”
Their story is already bringing about change.
Christine Matthews, a deputy director for the UN refugee agency, said last year they used the gaps in Allami’s case as a learning experience. They have since launched an effort to sensitize staff on the best ways to process such claims.
“We need to do better for refugees, all refugees including LGBT refugees,” she said.
And after years of separation, Hrebid still wakes up at night and asks: Am I dreaming or is this real? Are we really married? Will I wake up one day and find you gone?
“It’s almost like that fear never leaves you,” he says.
In Iraq, the two say they are considered an embarrassment to their communities, and family members don’t utter their names.
“Out of Iraq,” a documentary on their romance and fight for asylum, recently won an Emmy, but its two stars say they are hardly feted back home.
Even though they can’t go back to Iraq for fear of being killed, they’ve learned to define “home” in their own way.
“He’s my family, he’s my safe place, my love,” Allami says as Hrebid gently strokes his face.
“I may not have my country anymore, but he’s my country now.”