Primary teacher Andrew Moffat left his job after a backlash over his sexuality. Now he’s bringing his message of equality to a 99% Muslim primary in Birmingham 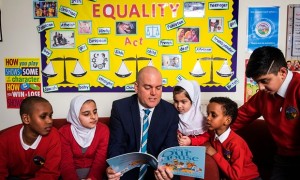 It took one complaint from a parent “as a Christian” to undo all Andrew Moffat’s work teaching children respect for people of different sexual orientation. A meeting of 40 parents followed with calls for an apology and the removal of books he had used in lessons.

Above all, the parents objected that he had told children he was gay. Moffat felt he could no longer continue and resigned. Far from retreating to a safe haven, however, he crossed Birmingham to take up an even greater challenge: assistant headteacher at Parkfield Community school, where 98.9% of pupils are from Muslim families.

The award-winning school is in the heart of a devout area where three inquiries have been held into the alleged “Trojan horse” plot by hardline Muslim governors to take over state schools, though Parkfield was not affected.

That was two years ago. With the backing of Hazel Pulley, the headteacher, Moffat went on to introduce a No Outsiders policy promoting diversity at the 770-pupil school, where 23 nationalities are represented. That includes welcoming people of any race, colour or religion and those who are lesbian, gay, bisexual or transgender.

A gay teacher teaching gay rights to pupils from a faith that believes homosexuality is a sin, punishable by death in some countries? It doesn’t seem possible and yet the school’s Muslim parents appear to have accepted that children can be taught about Britain’s anti-discrimination laws without undermining their religious beliefs. Learning from his unhappy experience at his previous school, Moffat has been careful to centre the policy around the Equality Act 2010, to first gain the support of the governing body, and to keep parents fully informed, inviting them in to see the books that would be used.

Now he has published a handbook about creating an ethos where everyone is welcome, regardless of differences: No Outsiders in Our School: Teaching the Equality Act in Primary Schools.

Moffat felt he had no alternative but to leave his previous school: “I knew I was letting down any pupil who might in years to come identify as LGBT and remember what had happened to me – if you ‘come out’ you risk a backlash and having to disappear. I was worried about that but in the end I decided that leaving was right for me and the school.

“It was a very difficult time and I was quite damaged by the experience. However, it gave me the opportunity to pick myself up and start again, learning from mistakes. There was no point in going to an area where it would be an easy task. I had to go where I might meet the same challenges in order to find a different way to meet them. I was determined to make LGBT equality a reality in any community. I could not afford to get it wrong a second time.”

Pulley says she appointed Moffat because she already knew of his work, in particular on improving pupil behaviour and on diversity. “I thought his approach was admirable. We already had similar work going on at school but we needed someone to lead it and give all the staff confidence,” she says.

It is possible to teach the law against discrimination in Britain without undermining any religious faith, she says: “Everyone knows we respect Islam here. One parent asked if he could not contradict what the school said. I told him that whatever parents said in the home was their decision but it’s lovely that the children will hear both views.”

The good relationship between governors, teachers and parents has helped, she says, and the fact parents have confidence in the school’s high standards – 97% of 11-year-olds reached or exceeded the expected standard for their age in both maths and English last year.

Last week parents, collecting their children before taking them to madrasas, the religious classes, spoke of their support. The school is “shedding light” on the minds of children, said one mother. Parents’ initial response had been “How dare they? How can the government make this law?” But their anger had abated once they learned more about the approach, they said.

“If they don’t learn about gay, lesbian and transgender people in society from school they will learn it from the outside world and they could hear things like ‘that’s disgusting’. I don’t want that,” said another. “I agree,” said a third. “I’d rather my children hear it at school. When they are at home we teach them that in our culture gay is not allowed but we respect people who are different from us and hope they too will respect us and the boundaries of our religion.”

The parent of a 10-year-old admitted her views differed from her husband’s: “My husband is a strict Muslim and my son asked him about the difference between what the school says and our religion. He did not give him a good reply. My reply was that God has created us and he is the only one who can judge us. I have told my son that it wouldn’t matter if he came home to me and said he was gay, you are my son and I will love you no matter what.”

Support from parents and governors for a whole school ethos to which everyone signs up has been a crucial factor, says Moffat. “It’s the UK law. We cannot promote an ethos that welcomes people of different faiths but not those of diverse sexual orientation.”

It hasn’t always been like that. Moffat was a teenager in 1988 when Margaret Thatcher’s Conservative government passed the Section 28 amendment to the Local Government Act 1986 that told schools they could not “intentionally promote homosexuality” or teach “the acceptability of homosexuality as a pretended family relationship”. It was repealed in Scotland in 2000 and the rest of Britain in 2003 but has left a legacy of nervousness about what teachers can and cannot say.

The Guardian sat in on a session with Class 5C. Children quietly waited for the book to start. Their teacher, Amy Collins, was reinforcing the No Outsiders in Our School ethos through an illustrated book And Tango Makes Three. The children heard about two male penguins who want to be a family but can’t have a child. They mistake a stone for an egg and sit on it for days. The zookeeper feels sorry for them and gives them a real egg, which eventually, to their joy, hatches and they have their own baby to care for.

“Why did Mr Gramzay give Roy and Silo an egg?” “He saw they were in love and were sad because they couldn’t be a family like the other penguins,” said a girl. “Now think about why they couldn’t have an egg’” said the teacher. “It’s because they are two male penguins,” said a boy. “When we have two male penguins or two people who are in love, what do we call it?” Every hand waves. “Gay”, said a boy.

The children decide that “No Outsiders” means that, in the words of one girl “There are no outsiders and everyone is equal, no matter what their religion or whether they are black or white or gay or lesbian. They are all welcome.”

Moffat says he wants to prove that the approach can be successful in every school. It’s early days, but teachers have noticed a difference in pupil behaviour and attitudes towards each other, especially in the playground.

Children in Parkfield’s Ambassador’s Club visit other schools to meet children from different backgrounds and spread the No Outsiders message. Moffat hopes it will reduce the potential for radicalisation of young people.

Under the government’s Prevent agenda schools must report pupils showing signs of radicalisation and Parkfield has passed on concerns over three children; two of these were followed up by the police with parental support all the way. The Prevent duty has been criticised as “spying” but a group of Parkfield parents firmly supported the referrals.

“If a school spots children being extremist they should monitor it and report it because when they grow up they could be terrorists,” says one. “We have got to help these children. It is to protect the child. So the school has every right to report any kind of radicalisation, not just Muslim but IRA or any kind of violent talk or behaviour that could lead to terrorism,” says another.

And what do the pupils think about No Outsiders? One nine-year-old boy says: “It’s really good, I believe that black people and white are equal. The gay part of it I’m not so sure. At school we learn that it doesn’t matter if you are gay or lesbian but at the mosque they say we shouldn’t be.”

Others think it possible to hold both positions: “My parents are fine with it,” says an eight-year-old. “They talked to me and said they respect what the school is doing and it is good but we must remember our Muslim faith.”

Last month Moffat felt the policy had embedded sufficiently for him to be open with children and parents about his own sexuality. So far, there have been no complaints.