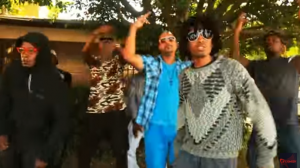 Sometimes I wonder why I even bother trying to refute the myth that black people have a monopoly on homophobia when there’s some colored cornball rushing to perpetuate this falsehood for white consumption.

When I was sent “Being a Gay Rapper: A Social Experiment,” I assumed based on the title that maybe it would be some fresh, funny take on the actual state of homophobia in hip-hop as opposed to the trope that speaks more to 1995 than 2015. Unfortunately, that is not the case here. Instead, comedian – and I’m using that title out of courtesy – Ben Bizuneh focuses on the disingenuous question, “Just how accepted homosexuality is in black America?”

You can’t see me, but at this very moment, I’m trying to stop myself from falling asleep at my desk. In any event, the skit begins with a joke and Bizuneh goes on to note, “It’s even worse in the black community.” That’s a lie considering it’s long been proven that black people make up the largest share of the LGBT community.

There’s also a new study that shows a majority of Christians in the U.S. are now more accepting of homosexuality.

Yes, Pew found that when it comes to support between 2007 to now, seven-in-10 Catholics say “the gay” should be accepted. For others, mainline Protestants (from 56% to 66%), Orthodox Christians (from 48% to 62%) and members of the historically black Protestant tradition (from 39% to 51%) have jumped in support as well. Remember: not all black Christians are in the black protestant tradition.

But why would facts matter to when your aim is to snuggle mainstream media folklore for careerist goals?

Bizuneh goes on to argue, “Black dudes can’t even pretend to be gay for acting roles.” He then lists all of these white actors who have played gay, though Will Smith playing a gay man in Six Degrees of Separation predates them all. Bizuneh then conveniently leaves out the reality that when it comes to offering a wide spectrum of black manhood, Hollywood – controlled majorly by non-black people – is lacking overall.

Are you laughing yet?

Then there is the actual “gag” in which Bizuneh seeks to recreate a hip-hop video based on every cliché he learned about the culture from BET videos that aired damn near a decade ago only with a twist: a song that’s actually about a man giving another man a hand job. In essence, he wants to troll a bunch of straight men by having them stand there and sing along to a song about a man jerking off another man.

Hear this in Toni Braxton’s voice: How many ways, I hate you.

For starters, this skit features someone who doesn’t really seem to understand the culture trying to speak on it. He does by way of trolling people as he has them perform the very stereotypes about gay people that make these kind of straight men uncomfortable. He is reducing gay men to sex, which is no less a stereotype than the effeminate gay male or down low brother (a term that should’ve caught a fatal stroke after that episode Oprah). Gay men are sexual beings, but to goad straight men into performing a song that plays directly into their fears feels fruitless if the intent is to highlight how gay men can – gasp – be just like any other man.

By the way, did I hear “followed by my posse?” Who talks like that? Well, outside Sir-Mix-A-Lot, circa the early 1990s?

Hip-hop has its problems – hypermasculinity and misogyny being the main culprits – but there has been a slow but steady evolution (the same goes for the society in which hip-hop culture merely reflects upon). If one can’t acknowledge that even in doing “comedy,” it’s not authentic representation of the problem as it stands todayversus the one in your figment of imagination.

This skit is not funny enough to make me forget any of that. While I may have grown tired of repeating myself, I will continue to so long as I have to keep hearing this lie repeated over and over again. Especially from someone with a Black face, who by now should know not to be as clueless as someone looking from the outside.

This skit can directly to hell and stay there. Happy Holidays!