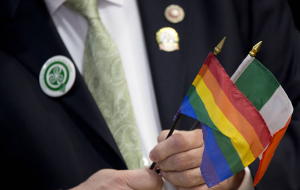 A celebration marking the first time the St. Patrick’s Day Parade on Fifth Avenue will allow gay Irish groups to march led some lawmakers to break into tears on Thursday as they spoke of the 25-year fight for inclusion in the event.

“There were many times when we wanted to give up and we wondered if we would ever see this day,” Councilman Daniel Dromm, a Queens Democrat who is gay, said before beginning to cry.

Thursday’s event at the Irish Consulate in Midtown brought together both the parade’s organizers and the Irish gay-rights activists who for decades had been banned from marching behind their own banner.

The result was an outpouring of an emotion rarely seen at news conferences: joy.

“We too are Irish. We are your sons. We are your daughters, your brothers, your sisters,” said Brendan Fay, chairman and co-founder of the Lavender & Green Alliance, the Irish LGBT group that will march in this year’s parade.

Mr. Fay thanked the parade organizers for what he called a “historic gesture of welcome” that “undoes the anguish and pain of exclusion and discrimination.”

Mr. de Blasio formally announced that he plans to march in the parade for the first time, after years of skipping the event along with many other city officials in protest of its ban on gay groups.

“For the last two decades there’s been a blemish on this city,” he said. “Who are we as New Yorkers? It is our nature to embrace and support all peoples.”

The decision by the parade’s board members to include the Lavender & Green Alliance in this year’s event was made in September. Parade organizers, gay activists and city officials said the agreement emerged through months of meetings and discussions, many at the Irish Consulate.

They said the Consul General of Ireland, Barbara Jones, played a key role in the negotiations. Ireland legalized same-sex marriage in a referendum last year.

Francis McGreal Jr., a board member, said parade organizers decided to make the change because “it’s time to move forward. What else can we say.”

Rick Hinshaw, a spokesman for the Catholic League, said it has decided not to march because of the decision. He said the League isn’t opposed to including gay groups but that other advocacy groups should be able to march under their own banners.

“If you’re going to allow groups marching under advocacy banners, you should allow like pro-life groups which are in line with the church’s teaching,” he said.

The ban was protested for decades through civil disobedience. Former City Council Speaker Christine Quinn and former state Sen. Tom Duane were among dozens arrested for protesting the parade’s policy over the years.

So was Councilman Jimmy Van Bramer, who attended Thursday’s ceremony. He teared up as he spoke about finally being able to attend the event as a participant.

In 1991, Mayor David Dinkins was booed while marching in solidarity alongside gay-rights activists at the parade. Mr. Fay said on Thursday that he was thinking of Mr. Dinkins, “who way back then walked with us, stood with us.”

Mr. Fay said he was also thinking of those who had died of AIDS over the years, as well as Father Mychal Judge, the New York Fire Department chaplain killed in the Sept. 11 attacks and was regarded by many gay New Yorkers as a powerful ally.