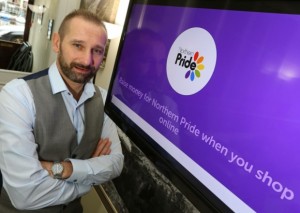 A business park boss sparked anger after he got himself in a lather over a pink novelty soap left in a men’s toilet with the words ‘gay bar’ on it.

Danny McLaughlan fired off an email to firms at Rainton Bridge Business Park with an image attached telling workers he found the bar of soap to be “inappropriate”.

The novelty £5 bar is available for sale in numerous gift retail outlets, including Amazon and eBay.

Mr McLaughlan’s email informed workers the offending soap had been removed – and told staff to contact him if they wanted it back.

He also called for a cull of other toilet products that had been left by staff members in Alexander House on the Houghton park, where the Echo is based.

But the call backfired because staff and gay rights campaigners found the email and stance “offensive”.

It is understand the soap had been given to a gay staff member at the park as a gift and they put it in the toilet for everyone to use.

One worker said:  “How can this be inappropriate?””

“It’s just ridiculous. We found his email inappropriate and offensive.”

“Why is he offended by the word gay on a bar of soap?”

“Who has got time to worry about soap and deodorant left in a toilet?”

When contacted by the Echo, Mr McLaughlan declined to comment and asked us to contact his manager.

James Millson, associate director of CBRE Ltd, which manages the building, said: “The park manager’s email makes reference to a number of items, the bar of soap probably being the most easily identifiable.

“The point being made in the email is that the items being left in the common toilets, which are shared with other users of the building, are not in keeping with consistent and corporate image that we aim to provide across the estate.

“We would have been removing any items ‘bars of soap’ irrespective of the slogan, brand or design and the point being made here is that the ‘random products’ being dispersed around the common parts are not in keeping with the management strategy for the building.

“In short there is no discriminatory agenda here, only a desire to provide premises to our tenants that are clean, smart and in keeping with the expectations of our client, tenants and visitors.”

Mark Nichols, chairman of Northern Pride, said: “It’s a bit like anything when it’s taken out of context, it could be used perfectly well, but could be taken to be insulting. It’s like saying ‘I’m gay’ and then ‘You’re so gay.

“The LGBT community use the word gay, there’s nothing wrong with saying gay.

“Everybody uses it all the time, so there shouldn’t be a problem with it.

“If he had just said ‘Please don’t leave personal items’ then fine, it would have been a bit petty.

“He doesn’t say the word gay is offensive but the fact is he has singled it out, that one item.

“He could have sent a picture of the make up bag and said this shouldn’t be left in the bathroom.”

Alisdair Cameron, North East-based Pride in Mind, a mental health support group, said: “Being gay, lesbian, bisexual, trans or any other sexuality or sexual identity is ordinary and a healthy part of life.

“Humour and self-mockery is also ordinary and again a healthy part of life.

“Somewhere down the line in this story, someone lost sight that both of these things are true, and that  one does not negate the other.”