Although Jordan Gray couldn’t turn the judges around on The Voice, she’s hopeful she will continue setting an example for trans people around the world. 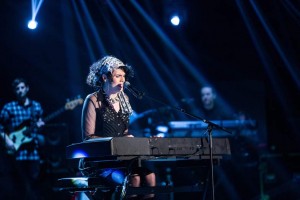 We caught up with the singer to talk The Voice, music, coming out and raising trans awareness on Saturday night telly.

Jordan! You’re the first transgender contestant on The Voice. Does a platform like this give you a chance to teach people about trans issues? Absolutely, and I take the responsibility very seriously. I’m really happy and life is too short to let things bother you, so it’s a wonderful responsibility. I’m VERY happy about it!

What’s the main message you hoped to send by being on the show, other than the fact you’re a great singer? I’m a singer first, a woman second and a transgender person third – and there’s a lot more of trans people on TV nowadays which is great.

You’ve been performing for two years as a woman. What was it like the first time you performed as the real you?It was liberating because I chose a night when I didn’t think there would be that many people at the bar I was playing at. It was just close friends and family and they had no idea! It was just a wonderful experience because they were so accepting!

It led me to come out as transgender on stage at the Essex Entertainment Awards in front of my whole county. That was AMAZING! It’s a moment that will always stay with me because Essex really surprised me. I’m from Thurrock, originally Essex, and I was so scared about how they would react, but they were all so wonderful so there’s no complaints from me as my county has been really really good to me!

Have you ever had any negative or transphobic reactions when performing? I’ve played boozers in the past and people don’t always quite understand it, but like I say life is just too short to let that bother you. I can usually get everybody on side with a bit of American Pie or Summer of 69. I chuck in a good song that everybody knows and suddenly everyone’s my best friend again! [Laughs]

Did you hope to help change attitudes across the entire country by being on the show, too? Yeah absolutely. I just think the more visible you can be as a trans person the better; and showing trans people in every walk of life is really important. Obviously I’m a musician, but we’re not all entertainers, and I think that’s an important thing. I’m not trying to speak on behalf of all transgender people and I would never claim to, but I do hope to be a positive example.

Who would have been your biggest threat in the competition? If I had got through, then I think my biggest threat would probably have been Lydia Lucy. She has such a massive and powerful voice.

Who are your influences music and style wise? It’s a lot of men that influence me. Jeff Buckley, Michael Jackson, David Gray, but also big country singers like Celine Dion and Shania Twain. I sing a wide range of styles so I couldn’t really give you a genre I prefer, but I definitely more piano based music because obviously I play on a keyboard.

You sang Bob Dylan’s Just Like a Woman. Does that song hold any significance to you? Yes, it might have been a bit of a coy choice as a trans woman. It’s actually the most beautiful song, and I thought if I get through or not I want to go out singing that song. It kind of feels like a trans anthem to me now and I just love it.

Have you ever done something like The Voice before? Nothing this big, although I’ve been in the business for 10 years so I’ve played a lot of different places. I’ve played in Scandinavia and I played at the o2 Islington Academy really recently and that was under my stage name, Tall Dark Friend. I’ve done a lot of stuff but this is the most viewers or biggest audience I’ve had in one big swoop.

And finally, how would you describe your performance style? It’s super high energy, for sure. I love medleys and mashing up lots of different styles, so it’s a bit wacky, but I always get the crowd on side and we ALWAYS have fun together!