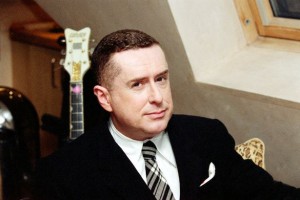 Openly and unapologetically gay, partnered to a man for 30 years and responsible for one of the most explicit songs in pop – we couldn’t find a gayer gay icon. Holly found fame and notoriety as the lead singer of agent provocateurs Frankie Goes to Hollywood, is about to release new album Europa this month and happily dishes the dirt on that golden era of gay pop music.

We meet Holly at a members club in Soho, though it’s not our first encounter. He’s a champion and supporter of new gay artists, and we’ve bumped into him at a couple of gigs like The Irrepressibles and Xiu Xiu. So straight away, we’re catching up with the warm Liverpudlian and into chatty mode. We start swapping stories and discussing someone who’s been interviewed recently in GT, but wasn’t prepared to talk about their sexuality. Despite being quite gay.

“For me, it’s really weird, having always been open about it since 1983 when I first did an interview for NME. It seems really strange we’re in that state of affairs, brushing it all under the carpet for higher record sales and acceptance. It’s almost as if me and Jimmy Somerville and all that work in the 80s has been for nothing in a sense, in pop music.”

Our conversation takes many jumps and tangents – “You haven’t seen Kate Bush? You’re such a rubbish gay!” – but keeps coming back to the 80s. And in particular, the lack of camaraderie between fellow gays of the time.

“It was highly bitchy,” Holly says when we ask him if there was any sense of community. “You’d be sitting next to another gay artist in the makeup chair, in the BBC or wherever in the world, and not speaking to them. That went on A LOT. It’s a totally different atmosphere, because it was competition in a sense. ‘Only room for one queen in this town!’ It was a little bit like that. I remember Morrissey coming up to me and standing very close on Top of the Pops with a hearing aid in his ear and I remember thinking ‘I’m not speaking to her…’” and here, Holly is on full on stand-up comedy routine, putting on a mock-affected voice and making us laugh far too raucously for the hushed surrounds of a sophisticated daytime members club.

“She’s only number 32 this week, we’re number one! Turned me nose up, turned on me heel and walked away…”

Both Gay Times and Frankie Goes to Hollywood took some of the flack of the era, with the hysterical approach to homophobia. Obscenity trials, blasphemy, being banned from the radio by the BBC – all these things were common place, from the expected sources and a few surprising ones.

“Mary Whitehouse. She didn’t like Relax either,” he says with a knowing grin. “But neither did Boy George. He wrote to Sounds, which was a music paper at the time, saying that we gave gays a bad name – which is quite funny… now. During the 80s, it was a little bit like Joan Crawford and Bette Davis, if you know what I mean.”

Oh, we do. “We did become really good friends later on, everything’s tickety-boo now.”

We love hearing stories like this. We could listen to inter-popstar banter all day, and Holly really hit his stride when the dictaphone was turned off – let’s just say the classic rock and pop closet is more crowded than you’d think. But we’re not here to dish the dirt. We’re here to salute Mr Johnson’s status as a genuine, bona fide gay icon.

“I’m SUCH an icon!” Holly claims, dripping with sarcasm. “I’m not even an icon in the traditional sense, I think of Judy Garland, Liza Minnelli, Barbra Streisand, Mariah Carey… I thought you had to be female and with a bit of a tragic backstory; alcohol, pregnancy situation, once being married to David Gest…” we let out another inappropriately loud laugh.

There are many things we can think of that make Holly an icon – mostly for the way he’s lived his life openly as a gay man, and for publicly talking about the realities of being HIV positive, helping to challenge the stigma that remains so strong because people are unwilling to discuss it. And these simple things, played out in the public eye, have a knock on effect of allowing people to live theirs the same way. It is, in a way, a political act.

“It is,” Holly concedes, “but I was never asking for acceptance. I was saying ‘I’m gay and if you don’t like it – up yours!’ It really was like that.”

In Holly’s own eyes, he should have some recognition for being with his boyfriend Wolfgang for three decades.

“That’s quite iconic, being with someone for 30 years. It’s fairly unheard of, isn’t it? I know it exists, but not much. I always say if I’d have killed him, I’d be out by now. Well, he laughs anyway. Politely.”

You probably won’t be surprised to learn that Holly has gone against convention and isn’t married.

“I absolutely respect the people who worked for it, and I’m really glad for the people who want it. Go back tothe 1990s when I was really ill and there was no combination therapy on the horizon, I would’ve done it in a flash to protect my partner from being turfed out of the house, my body being claimed by some family member and him being excluded from the funeral – which was happening all the time to people in that time period.

“I think it’s great that it exists, but some of us don’t feel the need. It’s like children. I always thought that was one of the great things about being gay, that you don’t have to! You can have nephews and nieces and give them back at the end of the day.”

Finally, it’s worth mentioning Holly has a new album out called Europa. From the upbeat synth-pop of latest single In and Out of Love, it has Holly’s soulful vocals stamped all over it. And in an ever-changing record industry, it’s the personal touches that make this very physical release to so special. “I’ve hand signed over 1,000 items. I’ve got wankers cramp. Autographers cramp, we should call it, signing art prints, deluxe CDs, vinyl editions…”

So boys, here’s your chance to lend a helping hand to an out gay artist. And one that’s still a bit of an icon at that.