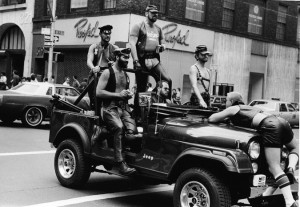 On a warm Saturday night in November, about 800 gay men wearing harnesses and other items made of leather gathered at Brut, a party held at Santos Party House in Lower Manhattan.

Mostly in their 20s and 30s, the men danced to pounding house music, flirted in an intimate lounge below the dance floor and ogled two beefy go-go men gyrating on boxes. Shirts came off, but leather harnesses stayed on all night, as Brut bills itself as New York’s only monthly leather party.

But if the party was introducing the leather scene to younger gay men who had never heard of the Village People, it also underscored a social shift: The leather scene has lost much of its overt sadomasochistic edge, and is now more about dressing up.

“I’m wearing a harness from Nasty Pig” — a sex-oriented clothing store in Chelsea — “but I’m not a part of the leather community,” said Joseph Alexiou, 31, a writer in New York, who was taking a break from the dance floor. “This party is introducing leather in a fun way that doesn’t seem so serious.”

Stalwarts of the leather scene agree that there has been a shift from lifestyle to sexy dress-up.

David Lauterstein, who opened Nasty Pig in 1994 with his husband, Frederick Kearney, said that his store has undergone a transformation of its own. While the store still carries leather harnesses and chaps, they have become seasonal items tied to specific parties; most racks these days display flannel shirts, hoodies and nylon bomber jackets.

“Leather has been integrated into the larger downtown culture, as gay sexuality has become more accepted,” Mr. Lauterstein said. “Being into kinky stuff doesn’t mean you have to wear certain clothing to let the world know.”

The leather scene used to occupy a very visible part of gay culture. In the 1960s through the early ’80s, men in leather caps and chaps could be seen strutting about Christopher Street, looking as if they had emerged from aTom of Finland illustration by way of a Marlon Brando movie still.

“Leather became metaphoric for claiming masculinity,” said Michael Bronski, a gender and sexuality studies professor at Harvard University and author of “A Queer History of the United States.” “These guys were baby boomers who’d been told that being gay meant being a sweater queen or being fluffy or effeminate.”

Gay leather bars dotted Manhattan, with names like the Spike, Rawhide, the Ramrod and Badlands. And during the city’s annual gay pride parade, wearers of leather played a prominent role. Indeed, the annual Leather Pride Night party was one of the parade’s main sources of funding.

But “progress” in the name of same-sex marriage, social acceptance and civil rights seemed to have taken its toll on the leather scene.

“Many factors, like gentrification and the fight for marriage equality, have contributed to the rise in homonormality,” said Jeremiah Moss, who chronicles the city’s evolution on the site Jeremiah’s Vanishing New York. “This is a very American melting pot phenomenon: If you assimilate, if you give up what makes you different, you can have rights.”

The Internet has also impacted the leather scene. “The fact that the bulk of most people’s kinky lives are being lived out online or on their phone has diminished the prominence of what I would call classic leather,” said Matt Johnson, the chairman of Folsom Street East, an annual street fair in Manhattan that celebrates all things leather. “However, the growth of the virtual world has democratized kink to a greater extent, and has led to a proliferation of kinky styles.”

AIDS also had a dramatic effect, according to Mr. Bronski. “Leather shifted and became less aggressively sexual,” he said. “You see the emergence of bear communities, which is about being supportive and huggy.”

Earlier this year, the organizers of Leather Pride Night announced thatafter 31 years they were ending its annual fund-raiser. “Leather Pride Night has run its course as a broad-based community event,” the group said in a statement. 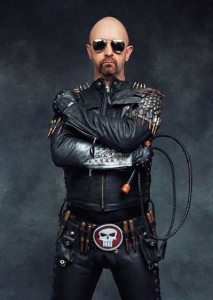