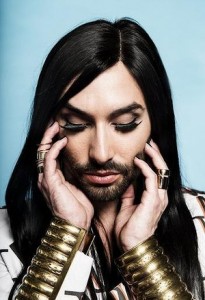 Australia looks like “gay heaven” to the rest of the world but the reality is somewhat different as Austrian drag queen Conchita Wurst discovered on her first visit.

“You know, we think everybody is very liberal, very open-minded, the whole city [is] celebrating Mardi Gras,” Wurst said.

“And then I came here two years ago and they told me that gay marriage is just not happening.

“I could not believe it. How can you combine those two worlds?”

Wurst, who will be performing at the Sydney Opera House on Thursday as part of this year’s Sydney Gay and Lesbian Mardi Gras, has been caught in the crossfire of tolerance and bigotry since winning the 2014 Eurovision Song Contest.
Wurst’s victory with the power ballad Rise Like a Phoenix prompted widespread praise and homophobic criticism particularly from Russia, where President Vladimir Putin’s government had enacted a law restricting gay and lesbian rights in 2013.
Austria’s president Heinz Fischer declared it was “not just a victory for Austria, but above all for diversity and tolerance in Europe”.
However, Russian national politician Vladimir Zhirinovsky expressed outrage: “Fifty years ago the Soviet army occupied Austria. We made a mistake in freeing Austria. We should have stayed.”

Russian men, meanwhile, posted photos on social media showing them shaving off their beards in protest at Wurst robbing facial hair of its masculinity.

“I don’t understand why people spend so much time thinking about me if they don’t like what I do,” Wurst says. “I couldn’t care less about things I don’t like.”

Wurst, the alter ego of 27-year-old Thomas Neuwirth, grows a beard because she said otherwise “my face would look like the face of a 12-year-old”.

She expressed wonderment at the depth of hostility caused by her Eurovision win: “I’m not that powerful to take out the masculinity of a beard.”

Yet Wurst has become a global gay icon and spokesman for gay rights, performing at Pride festivals across Europe as well as at an anti-discrimination event held at the European Parliament in Brussels and at the United Nations Office at Vienna in front of UN Secretary-General Ban Ki-Moon.

Beyond gay rights, Wurst is vocal about other human rights issues such as the plight of Syrian refugees in Europe. Austria is one of a number of European countries that has capped the number of refugees it will accept this year.

“If you were in this situation, if you have to leave your home because there’s nothing worth staying, you would wish to meet people who would treat you respectfully,” she said.

Wurst will perform her show Conchita: From Vienna with Love with the Sydney Symphony Orchestra and singers Trevor Ashley, Paul Capsis​ and Courtney Act​.

“Everyone on the planet who makes music wants to be on that stage and I can’t even tell you how honoured and happy I am to be in this position,” she said.

Wurst will perform songs from her debut album as well as showstoppers by divas such as Shirley Bassey, but she distinguishes her act from typical drag queen fare.

“I thought as a drag queen I needed to be loud, over-the-top, kinda of bitchy like many drag queens we know,” she said. “We all enjoy that … but I’m just not that kind of person. I see myself as quite boring and simple.”

Despite her advocacy of marriage equality, Wurst remains single (“I’m married to myself”).

Wurst called herself a “very complicated person” and said she was a different person in a relationship.

“I totally change my mindset and I really turn into a very annoying person,” she said. “I’m jealous, I’m moody, I’m really not good to be around as a boyfriend.”

She added: “I did not know this would turn into a psychological thing.”

Conchita: From Vienna with Love is at the Sydney Opera House on March 3.