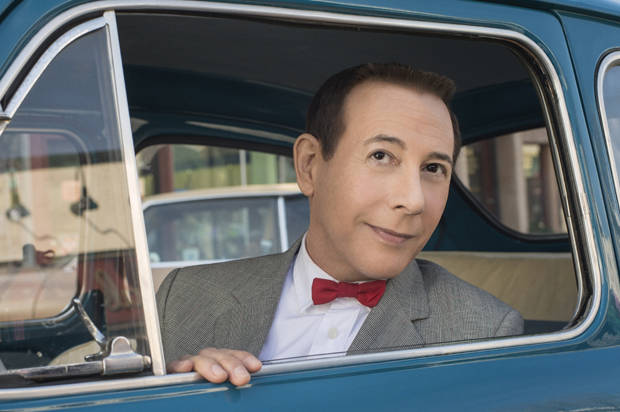 These sentiments are voiced three different times in “Pee-wee’s Big Adventure,” the Tim Burton-directed film that popularized Pee-wee Herman, the guileless manchild in the grey suit and red bowtie. Throughout the 1985 film, Pee-wee routinely rejects the advances of Dottie, a button-cute blonde played in a rare on-screen role by voice-over actress Elizabeth Daly (“Rugrats”). The joke isn’t just that Dottie is hopelessly, cluelessly in love with Pee-wee but seeing the character’s own image juxtaposed with his statement. These are the words you might hear from Johnny Depp’s meticulously coiffed greaser in John Waters’ “Cry-Baby,” not someone whose closest antecedent is Waters himself.

Pee-wee’s noted lack of interest in the fairer sex has long led to speculation about his sexuality—with the implication that he’s gay. If you’ve come into “Pee-wee’s Big Holiday” with that idea in mind, the film will do little to dissuade you. The Netflix release, directed by John Lee (“Wonder Showzen”) and produced by Judd Apatow (“Freaks and Geeks”), finds Pee-wee Herman getting his bromance on with Joe Manganiello, playing a version of himself. Manganiello rides up to the diner where Pee-wee works on a motorcycle wearing a too-tight tee, and Pee-wee nearly faints. True to form, he refers to the “True Blood” actor as “triple cool!”

The movie never plays down its potential homoerotic elements: Aside from Pee-wee’s clear overexuberance at serving Joe Manganiello a milkshake, the character develops something of a crush on the hunky actor (and who could blame him?). He expresses his desires for “friendship” with Manganiello in fantasies where the two joust on what appear to be giant piñatas; meanwhile, fireworks explode in the background. It’s about as subtle as the end credits of “Deadpool,” in which the spandexed superhero jerks off a unicorn.

The film’s overt gayness led many, like BuzzFeed’s Louis Peitzman, to declare it a “queer romance.” “[C]ategorizing Pee-wee and Joe as ‘just friends’ would be, at best, a euphemistic solution to a relationship that’s deliberately vague but undeniably queer,” he writes. “Because Pee-wee is almost entirely sexless, his age indeterminate but his interests decidedly childlike, he can never consummate anything. Instead, he and Joe share the kind of mutual crush that passes for grade-school intimacy.” Slate’s Paul H. Johnson added that the character has always been gay, even back in the days of “Pee-wee’s Playhouse.” He married a fruit salad in one episode, forgodsakes.

These takes are smart, well-written and accurate: There’s something that’s always been defiantly, unmistakably queer about Pee-wee Herman, but it would be a mistake to solely ascribe that to his sexuality. Pee-wee might live in a world of adult longings and eroticism, but Pee-wee does not partake. It’s not that he’s queer or even asexual, but that—by being frozen in a state of stunted adolescence—he exists in a prepubescent universe where sexuality doesn’t quite exist yet. The queerest thing about Pee-wee Herman is that he purposefully breaks with those notions by rethinking the boundaries of what “queerness” really is—an act of societal rebellion.

If Pee-wee is a PG character in an R-rated universe, that’s no accident: The persona was developed while Paul Reubens was a member of the Groundlings, the L.A.-based improvisational comedy group that also gave Will Ferrell, Phil Hartman and Melissa McCarthy their starts. Reubens’ “Pee-wee Herman Show” began as a weekly midnight show with a grown-up slant. When he appeared on “Late Night With David Letterman” in 1983, Pee-wee romped around the set like a kid in a candy store—seemingly unaware of the adult show he’s on. “Camping with Pee-wee, that’s like a headline in the Post!” Letterman jokes. Pee-wee has no idea what he’s talking about.

His own lack of awareness is central to how we understand Pee-wee Herman—and how we read his character. In Peitzman’s essay, he refers to homosexuality as the “subtext” of “Pee-wee’s Big Holiday,” but if we’re being honest, it’s the context. “Pee-wee’s Playhouse” might as well take place in a gay bar. Take the program’s holiday special, for instance: The episode boasted a queer cornucopia of guest stars, including community icons like Cher, Zsa Zsa Gabor, Dinah Shore and kd lang. Pee-wee goes ice-skating with Little Richard. Grace Jones even drops by to sing “The Little Drummer Boy.” If that’s not enough, a group of shirtless construction workers build a tower out of fruitcakes.

If subtext by definition is furtive and secret, the queer reading of this episode couldn’t be any more overt if it were singing the Village People in gold booty shorts. The joke is that if the world around him is fabulously gay, Pee-wee hasn’t the slightest clue. The ongoing series of Pee-wee Herman films and television programs delight in placing the character in settings where his naive innocence is at odds with his surroundings, even the film he’s in: “Pee-wee’s Big Adventure” finds him in a coming-of-age tale, even if Herman—by nature—doesn’t grow. “Big Holiday,” however, reimagines his hero’s journey as a romantic quest—except that the character himself finds that concept gross, like eating his peas.