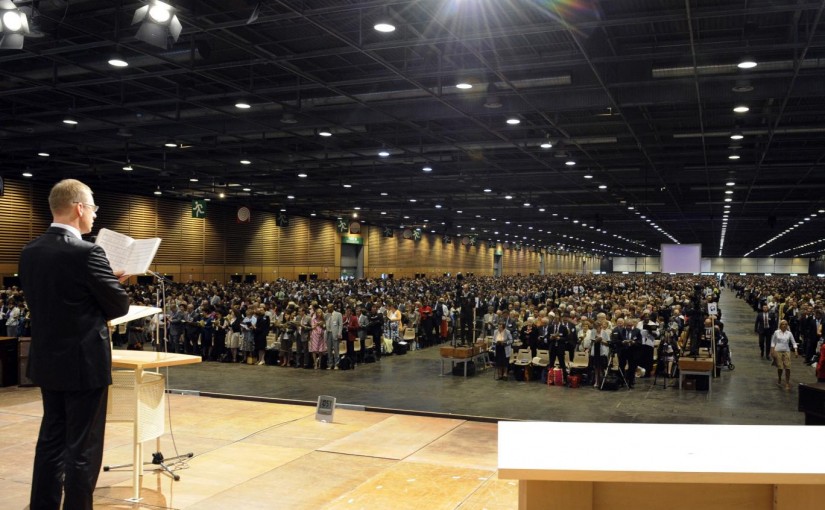 A few days ago, I read an article in one of the more LGBT-focussed online publications about the Jehovah’s Witnesses (hereafter JWs) highlighting the fact that they’ve recently put together a selection of films. In amongst them is a film entitled “One Man, One Woman”, that I’d encourage you to watch – it’s currently listed proudly in the ‘Featured’ section of their very slick website. This video purports to be about gay parenting, but it’s really a direct challenge to the first encounter many children will have with gay people – namely classmates with gay parents.

For anyone who thinks they’ve never encountered the JWs before, you probably in fact have. You’re quite likely to have seen a pair of well-dressed inoffensive-looking middle-aged folk, Watchtower magazines in both hands (and on a magazine stand next to them), holding out both hands with a benign expression in an ostentatious gesture of assumed generous benevolence. In London they’re usually outside major train stations like Oxford Circus or Liverpool Street, but you will also find them in high streets around the country, and of course sometimes they’ll even come a-knocking. Most people dismiss them gently but firmly, although some are gentler than others.

I didn’t grow up a JW, but I was brought up by fundamentalist Christians. We had no television, went to church twice a week, and I spent a good portion of my earlier life almost entirely unaware of popular culture. An insular environment like this can have a profound effect on a child, and gives parents a great deal of control over what the child does, thinks, and is exposed to. For me growing up, my parents were my whole world – I hung on their every word, believed it passionately. I’m sure this is the same for many children, but I think for me it was a little more extreme.

Learning how my parents felt about homosexuality (they definitely weren’t on board with the whole thing whatsoever) took me to quite a dark place, especially for an 11-year-old. My parents were very fond of that catchall quotation from 2 Timothy 3:16 “All Scripture is God-breathed”, taking it to mean that every word in the Bible was literally and directly from God. As they gently and kindly explained to me that how I was feeling could be changed, should be changed, and didn’t fit with what God wanted (going so far as in fact to say that it was the moral equivalent of bestiality), I believed every single word. They were quoting from the Bible, which came from God, and so clearly everything they were saying was indubitable, incontestable and I was just wrong somehow. Sounds pretty absolute, doesn’t it?

In this case it was clear to me that I had somehow been programmed wrong, or maybe I just didn’t understand myself properly – so for the next few years I meandered on in something of a grey, periodically suicidal daze.

“This is ridiculous, imagine believing something like this!” is the reaction from the intellectuals, the secularists, even some mainstream Christians, no doubt. The natural way so many people deal with these messages is with dismissal and ridicule. Articles on LGBT websites reporting on the videos take pretty sardonic stances – Pink News refers to a “Creepy Cartoon Mother” and comes to simple conclusion: “Solid parenting.” Sure, it’s good to laugh – but we’re missing something important here.